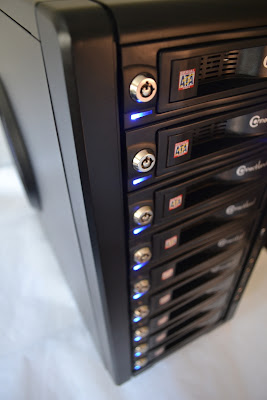 Welcome to the Greenleaf Prototype Builds Blog! The successor of Raj’s Prototype Builds, this blog allows us to provide DIYers with the most up-to-date hardware recommendations and test results for Greenleaf and unRAID servers.

Prototype designs that have proven themselves over time will be posted to the Recommended Builds section of the unRAID wiki. We’ve designed some of these servers with specific expansion paths in mind. You’ll notice that we repeat a lot of components in many of these designs; this makes testing for unRAID compatibility and reliability much easier, and it also allows for easy expansion along the paths I’ve outlined here.

All capacity calculations assume the use of 2 TB drives. All designs are also compatible with 3TB+ drives unless otherwise noted, although the use of 3TB+ drives requires unRAID beta software at the current time.

Budget Build – Intended to net you the highest drive capacity for the least amount of money. These servers are designed for basic unRAID usage, meaning data storage, media streaming, etc. They may or may not be fast/powerful enough to handle high-end add-ons such as video transcoding. These designs are the basis of the Greenleaf Eco servers.

Beast - Intended to be powerful multitasking servers. They cost more, but they will allow you to run any add-on you throw at them. These designs are the basis of the Greenleaf Pro servers.

Micro - These servers are intended to be as physically small as possible, also known as SFF (small form factor). Generally you will sacrifice some drive capacity when building this small. These designs are the basis of the Greenleaf SFF servers.

Mini - Also built with the intention of being physically small, but with more of an emphasis on striking a balance between size and drive capacity. These servers will have large drive capacities than the Micro builds, but not nearly as much as the Budget Build or Beast servers. These are not yet the basis of any Greenleaf servers, but they can be ordered as custom builds.

Both the Micro and Mini builds will generally use lower power components akin to the Budget Builds.

Notes
Yet again, the motherboard I have awarded the title of ‘budget board’ has been discontinued. I will start a new round of budget board testing soon (hopefully within a week or two). In the meantime, my old favorite the Biostar A760G M2+ has reappeared on eBay for $60 shipped. Note that this board takes DDR2 RAM (this will do nicely). All the other components I list in the Budget Box designs will work with this motherboard.

Regarding Norco SS-500 and SS-400 fan upgrades: The fans I recommend match the cooling power of the stock fans while producing less noise. I don’t consider the stock fans in the Norco drive cages to be too loud, but some folks do. If you are going to place one of these servers in a closet, garage, basement, or attic then you don’t need to upgrade the fans. If you are going to place the server in a noise sensitive area such as a living room, bedroom, or office then you may want to upgrade the fans to the quieter models I recommend.