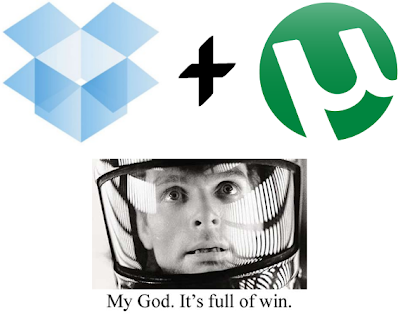 This solution just occurred to me and upon trying it out it I can only say: GREAT SUCCESS.

Here’s my network at a glance: 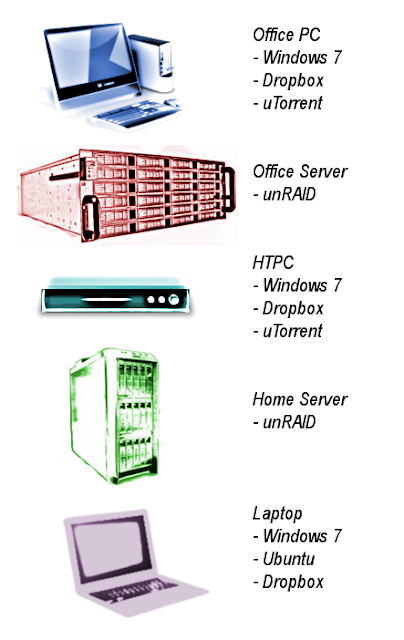 The HTPC has a standard 5 MBit internet connection, whereas the office computer has a blazing fast 20 Mbit internet connection. I download most things through the slower HTPC connection simply because I don’t want to have to ferry the downloaded data from my office to my home via a flash drive or external hard drive.The HTPC boots from a small SSD and downloads to the home server’s cache drive. If I want to download something massive or don’t want to be patient, then I’ll use my office computer’s 20 Mbit connection. The office computer downloads to an internal 500 GB data drive, but seeds from the office server. I have TeamViewer installed on all the Windows machines so that I can control any computer/server on the network from any other computer.

I do most of my torrent browsing from my laptop or from my office computer, and I wanted to be able to trigger a download on either the HTPC or Office computer from anywhere. Then it hit me: point uTorrent’s Autoload directory to a folder within Dropbox!

It was one of those “Its so simple, why didn’t I think of this before?” kind of moments. I now have two Dropbox autoload folders:

No matter what computer I’m using to browse, I can trigger a torrent download on either the HTPC or office computer simply by placing the torrent file in the appropriate Dropbox autoload folder. I also have uTorrent set to ‘delete loaded torrents,’ so Dropbox automatically informs me if the process is successful by notifying me when the torrent file has been deleted (meaning that uTorrent did in fact pick it up and start downloading it). I can still use TeamViewer or uTorrent remote to check on the download status if needed. 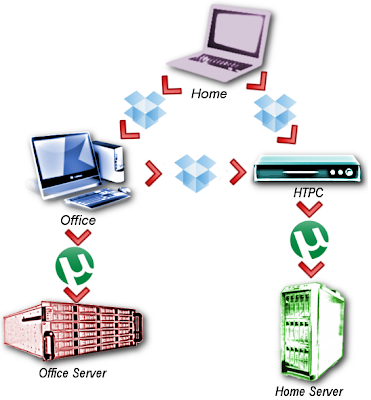 If you have only one computer that you would like to handle all of your torrent downloading you could remap your browser’s default download location to be within Dropbox as well! This would remove one step from the process, but it would also clutter up your Dropbox with all kinds of non-torrent files that you have downloaded.  If you like to keep a clean download folder (or use Dropbox’s selective sync function) then this option might work well for you.

Ideally, I would like to run both uTorrent and Dropbox directly on my unRAID servers so that the Windows computers don’t have to run 24/7. Since uTorrent and Dropbox both offer Linux versions, it might be possible to create unRAID add-ons for them in the future. I’ll add this idea to Greenleaf’s ever-growing to-do list. In the meantime, an ESXi server would allow you to run unRAID and Windows side-by-side, getting the best of both worlds.

Overall this is a fairly simple solution, it just took me a while to come up with this specific combination of cloud syncing and watch folder technologies to get this system just right. My next task: figure out how to auto-rename all downloaded torrents for easy scraping within XBMC without having to manually point each torrent to the renamed file….