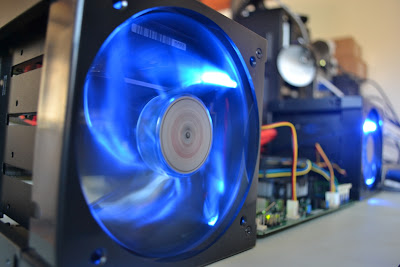 At the time of writing, the current stable release of unRAID is unRAID 4.7. While 4.7 is a great product, one of its limitations is that it uses MBRs and not GPTs. In layman’s terms, that means that it is incompatible with any hard drive larger than 2.2 TB. As 2.5 TB and 3 TB drives are on the market today at attractive price points, many unRAID users have switched to using the latest unRAID beta (currently unRAID 5.0beta11), which has both MBR and GPT support. This means that any capacity drive can be used as a parity, data, or cache drive in the latest unRAID beta. I recently got my hands on 15 of the fabulous 3 TB Hitachi DeskStar 5K3000 CoolSpin hard drives. These are green drives that spin at 5400 RPM and use a SATA III (6.0 Gb/s) interface. I took the opportunity to test as much hardware as I had available to me for 3 TB hard drive compatibility. Here is the hardware I tested:

I also tested the 2 port PCIe x1 SIL3132 card that we use in certain GreenLeaf builds. I decided not to run any thorough tests on the Supermicro AOC-SASLP-MV8 controller as it has already been well established as being fully compatible with 3 TB drive through tests conducted by other members of the unRAID community.

All tests were performed using unRAID 5.0beta10 (which was the latest beta available at the time) and Joe L.’s preclear script 1.12beta (which is the only version of preclear currently available that supports 3 TB drives). A hardware component passed the test if it precleared successfully and was recognized by unRAID as an array drive. Here are the results:

If you plan to preclear a lot of 3 TB drives, more RAM and a faster processor can help speed up the process by as much 10 hours.